Roles/Security Groups not doing anything

I created a role called “Assistant” and disabled all but a few modules and set almost all permissions to “Owner.”

I added the role to a security group named “Assistant” as well.

When I assign the role, group, or both the group and the role to a user, it has no effect. They are still able to access EVERYTHIN–all modules and all permissions, including the modules that are “disabled.”

This is a massive security flaw. How can I troubleshoot this? Thank you. 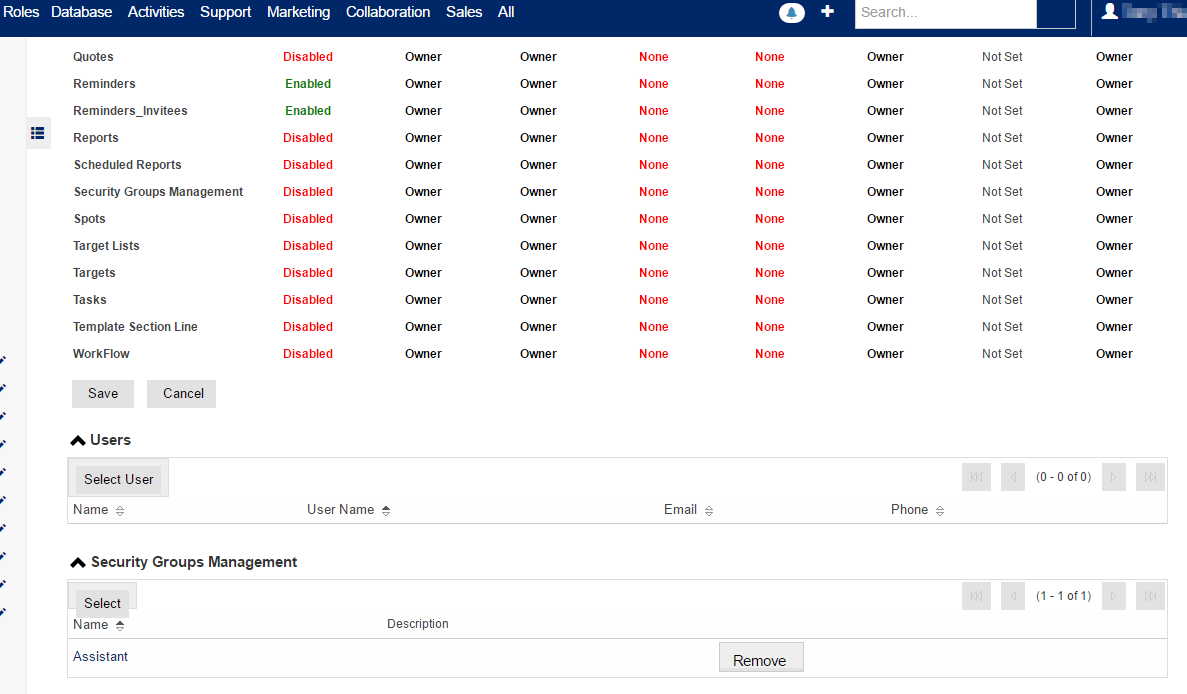 This is a bit confusing at first, and I’m not the best person to help you. But I got my security settings working thanks to this article that I always recommend:

Try to follow that and see if can apply it to your situation… good luck.

i spent quite long time to understand how it works and now I have something working fine like this:

this tells, this user has this role for this modules, if in a role management module line it is specified GROUP instead of ALL, then this user can see only records assigned to the security group of this user. the way the record is created with a specific security group is managed by the user security group.

like you, I was thinking that adding the security group of users to role management was the correct way to add a list of desired users to the role… but it is not the case.
if you assign a security group to a role it is more like you say that this role in Role module is in security group assistant, I’m not sure to be clear but once you forget about security group like a user group in a computer management where assigning a paramter to a group is applying it to all users in the group… then you see the light

I know this is a bit of an old thread but seems the same issue is coming up.

like you, I was thinking that adding the security group of users to role management was the correct way to add a list of desired users to the role… but it is not the case.

It sounds like JulienB is saying that Security Groups don’t do anything on their own and that you need to assign users directly to roles rather than groups for any effect.

There are 3 key steps to setting up Groups so that you work correctly.

Logging in as User1 and User2 I can see/edit all leads, not just those assigned to the current user.
Went in and ran repair roles from admin. no difference.

Did I miss something? I have read and re-read both the suite and sugar docs on this as well as some forum posts and stackoverflow stuff and I don’t see what I am doing wrong…why the securitysuite doesn’t seem to have any effect.

I checked (enabled) “Not Inheritable” for the Sales security group and did quick R&R and repair roles.
Somehow that made a difference. User1 and User2 now only see the leads that are assigned to them.

I found this faq which says:

What does “Not Inheritable” mean?

There are two places where this field can be found. The first is on the group itself. If the “Not Inheritable” field is checked then the group will not automatically be attached to any record. This can be useful for cases such as creating groups to assign roles to.

The second place where the “Not Inheritable” checkbox can be found is in the Users subpanel within a group. The meaning is similar here. If the checkbox is checked that group will not inherit for that user. This can be set by clicking on the “edit” link on the appropriate row in the Users subpanel. An example use case is when a manager needs to be able to view a group’s activity but the group shouldn’t see the manager’s activity. By checking “Not Inheritable” the group will not automatically be assigned to any record that the manager creates.

To be honest, still not really clear/obvious to me how this works (and I’ve personally designed and implemented group/role/permissions management systems for apps).

even though that is meant to support the paid-for extension,I believe the author is always very helpful even for users who are just using the free version.

Okay. Thanks. I figured since this was a very simple case following the docs that we it should be someone well understood. But perhaps not.

Good to know that this security stuff is maintained by a third party. I didn’t really make that connection as it came with SuiteCRM and wasn’t a third-party add on.

The other weird thing that I just noticed is that my sales users have lost the ability to see the detail view. ie from the lead list view they can edit, but the linking to the detail view for each lead is gone. Of course they have owner-only across the board so there shouldn’t be a different behaviour for list/edit/detail view. Maybe a bug.

Thanks as always for your fast replies.

The other weird thing that I just noticed is that my sales users have lost the ability to see the detail view. ie from the lead list view they can edit, but the linking to the detail view for each lead is gone. Of course they have owner-only across the board so there shouldn’t be a different behaviour for list/edit/detail view.

Figured it out. I had customized the list view columns and used lastname, firstname instead of name. Apparently the linking to the detail page is only done on the name (combined first/last) field as opposed to the entire row. So if you customize the list view and remove the name column you will lose linking to detail view.

I have viewed the topics going on the security groups and roles, Can any one suggest to achieve the below scenario.

Thanks in advance! Please guide me to achieve the above scenario.