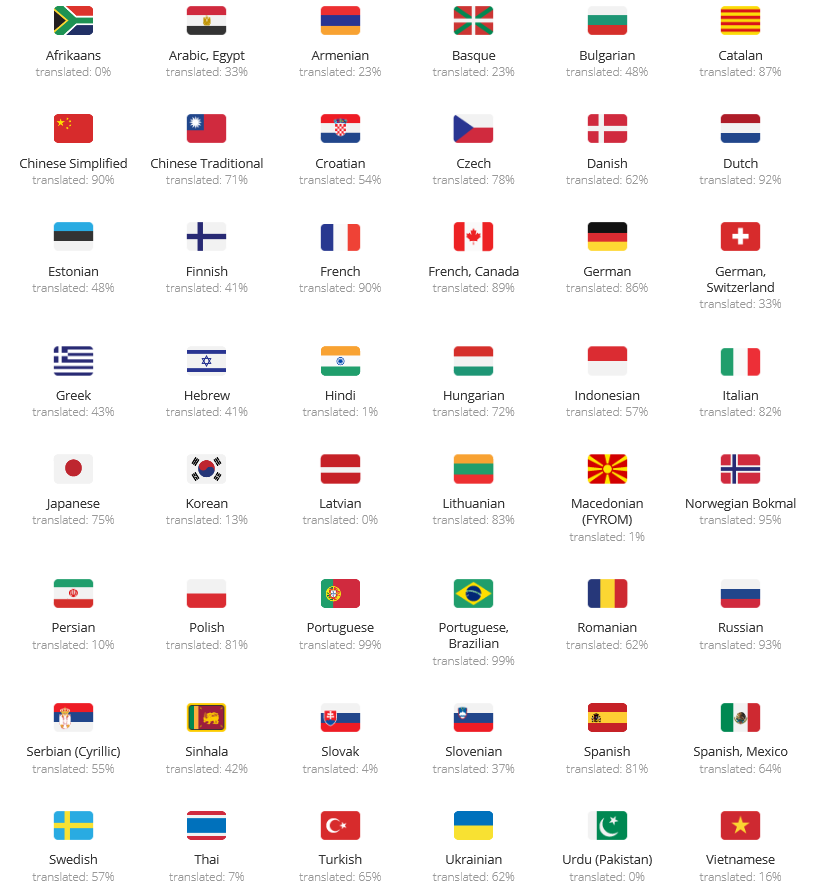 This is the top 15 languages on translation project for SuiteCRM 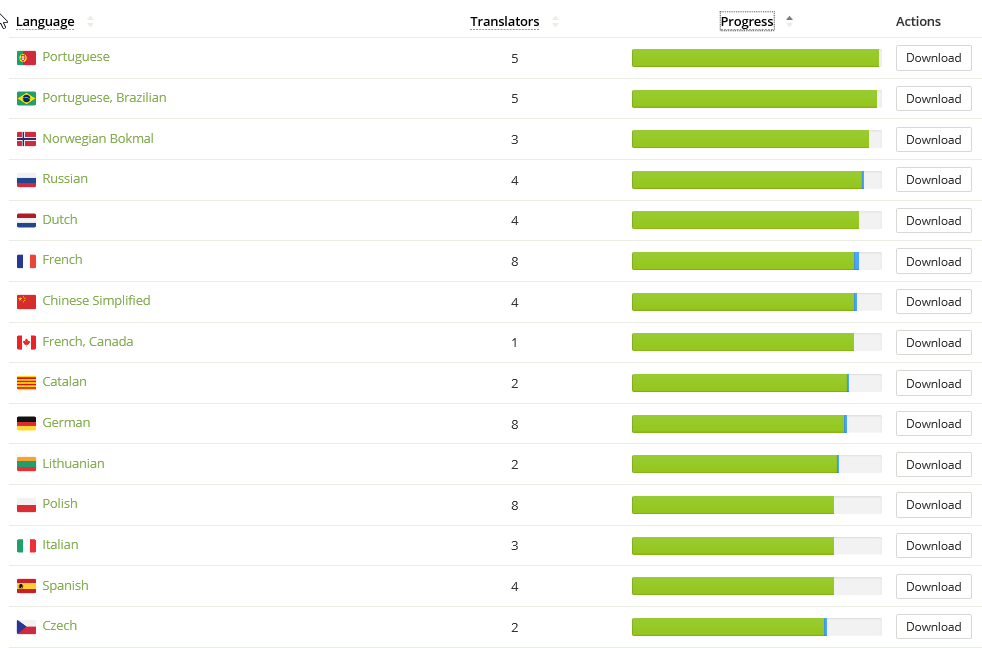 How about your language?
Join in translate and download (did I said it’s all free?)
https://crowdin.com/project/suitecrmtranslations

SuiteCRM is now being translated to 53 languages. Thanks to all the translators for this impressive work:

[size=5]Did you know that you are the person required to finish your language translation?[/size]
Even if your language has lots of words left to be translated consider that many of them are repeated ones and Crowdin will auto fill from your translations, so you will have less work then the expected.
To find those words just select your language, then click “Translate All” button and then filter by “Untranslated first”.

Note: sorry for the misspellings in this message but I don’t speak english and used the Google translator.
On the other hand, even knowing SuiteCRM is translated by true native language users I bet that you can find and fix some errors in SuiteCRM translation. Please do it now, fixing one error will make the software greater. 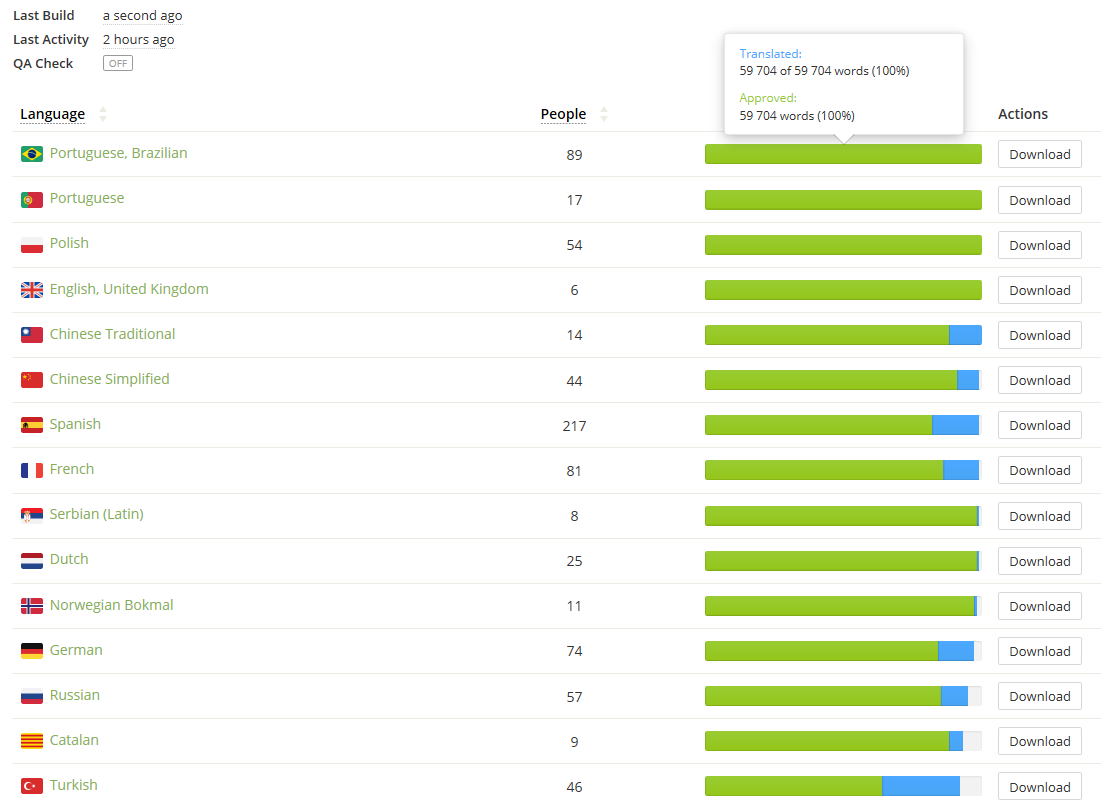 The number of words in language files has dropped in more than 7600 words for the version 7.9.5.0.
This is the result of a massive PR https://github.com/salesagility/SuiteCRM/pull/4034
Thanks for all the involved in reporting and removing the strings from language files.
The Crowdin Project is now updated to include this change.

Note: duplicates are strings with same values that do not require direct translations as they are auto-filled from the “twin” value translation.
So a translator just need to translate some 47 000 words!
Better to work in teams on Crowdin!

Yeah, and all those words multiplied by the number of languages we have… that’s really a lot of work saved.

Congratulations to you and Likhobory and Dillon Brown for all the hard work on this operation! And of course, to anyone else who might have helped.

9 of the SuiteCRM languages are now completely translated.

Have you translated some words lately? Can you give away 15 minutes?
Get involved and participate in the translation with some words.

Note: Download is free, this is a community project for SuiteCRM.
I’m not a SalesAgility member, just a regular user like you!

If you don’t use translations or don’t have the time, you can help us to:
be involved by sharing a link to the translation project with your social media followers and invite others to translate.

Next ones to be competed? Maybe the Chinese Traditional, Thai and Catalan languages!
Special note to Vietnamese and Macedonia language: people are working hard on this two languages (even it they are far away from been completed)

You are the one missing here, have fun translating some words today!

SuiteCRM is now translated into 57 languages

There are also 2 new additions:

Please invite other to translate, share this link on your social networks:
https://crowdin.com/project/suitecrmtranslations 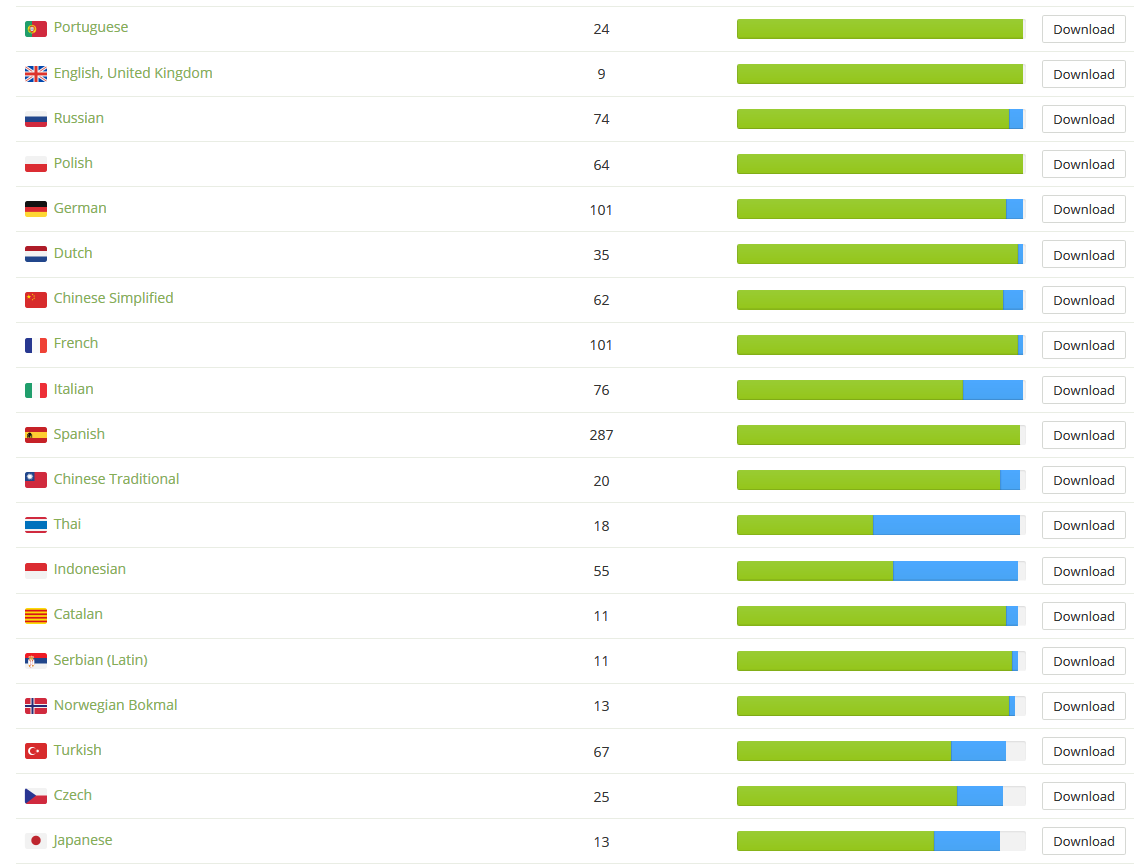 Update on the newest languages:

If you want more languages, get involved and invite others to translate too!